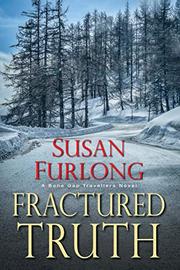 A harrowing tale of murder, bigotry, and redemption.

Brynn Callahan and her cadaver dog, Wilco, were both badly injured by an IED and invalided out of the Marines. They’ve returned to her grandmother’s home in Bone Gap, Tennessee, a stultifying place she had been trying to escape. Born into the community of Irish Travellers in Bone Gap, Brynn has faced prejudice her whole life and is fiercely loyal to her clan. Since helping Sheriff Pusser solve a crime (Splintered Silence, 2017), she’s taken a job with the sheriff’s department and now feels the scorn of both the locals and the Travellers, who consider her a traitor. Aided by Wilco, she rediscovers the body of a girl first found in a cave by a skier, brutally stabbed, surrounded by slaughtered chickens and pagan symbols, and identified as the 17-year-old Traveller Maura Keene. Maura's mother and twin brother, Eddie, are devastated. They hadn’t missed Maura because they thought she was staying over with a friend while they shopped for a dress for Maura's upcoming wedding to Nevan Meath. Maura was pregnant, but Nevan wasn’t the father, although he is the leading suspect in her death. While the sheriff’s department is quick to blame Travellers for local crimes, Brynn focuses on the mayor’s son, the putative father of Maura’s child. Meanwhile, she continues to fight demons of her own. In constant pain from her wounds, she drinks heavily and is addicted to pain pills, relying on Wilco, her only devoted friend, to keep her going. Refusing to accept Nevan’s guilt, she turns up new clues, including Maura’s diary, and relives painful memories buried in her past. As her life hangs in the balance, she realizes there’s no easy road to absolution for her sins.

A striking mystery whose twists and turns are complemented by raw descriptions of prejudice, physical pain, and the horrors of addiction.