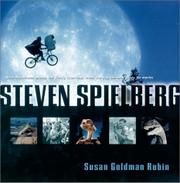 E.T., Schindler’s List, and An American Tale—these seemingly disparate movies all came from the mind of Steven Spielberg, arguably one of the most influential people in the history of cinema. Filled with interviews with Spielberg’s friends, the stars of his films, and his family, this biography presents the man behind the legend. From exploding cherry pie filling his mother’s kitchen to the games he used to play to torment his sisters, it is apparent that Spielberg was destined to become a creative filmmaker. This fast-paced look at Spielberg’s life from childhood through the present is filled with never-before-seen family photographs, eye-catching movie stills, and behind-the-scenes glimpses of movie-making magic. Humorous anecdotes of his early filmmaking career fill the first several chapters, making this an excellent choice for reluctant readers. A bibliography includes films, CDs, videos, interviews, and recordings, as well as books and articles. (glossary of filmmaking terms) (Biography. 10-15)