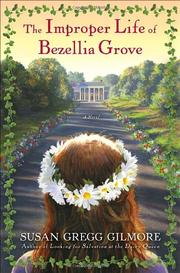 THE IMPROPER LIFE OF BEZELLIA GROVE

Gilmore (Looking for Salvation at the Dairy Queen, 2008) concocts a poor-little-rich-girl story set in civil-rights–era Nashville.

The Groves are one of Nashville’s oldest, most prominent families, but under the proper gentility lurks Southern gothic dysfunction. Originally from a more modest background, Mother is a shallow, racist social climber who veers between ignoring and abusing her two daughters as she slides into alcoholism and mental illness. Father is a spineless womanizer who pays little attention to his wife and children before his suspicious but accidental death. Bezellia and her younger sister Adelaide survive their upbringing thanks mainly to their saintly black servants: live-in maid Maizelle and chauffeur-grounds man Nathaniel. In 1965, when Bezellia is 14, Nathaniel’s son Samuel comes to work with his father. Soon Bezellia and Samuel form a special friendship, but the adults separate them. In 1968 Mother won’t let Bezellia go on her high school’s trip to Paris because the chaperone is Father’s mistress. Instead Bezellia spends the summer with Mother’s parents in the country, where she becomes romantically involved with Ruddy, a farm boy whose poverty makes him unacceptable despite his musical ambitions. Anyway, it is Samuel whom Bezellia truly loves. Shortly after their one opportunity to make tender love, he leaves town for college followed by civil-rights activism and a stint in Vietnam. (Tone-deaf to the era, Gilmore has Samuel compare an Alabama sheriff to the North Vietnamese.) In 1970, Bezellia and Samuel have a brief reunion interrupted by a vicious racist attack. The years pass in newspaper articles. By 2044, Bezellia has never married despite maintaining friendships with both singing star Ruddy and Nashville mayor Samuel. She’s become a philanthropist and written a novel about the namesake ancestor she has spent her life emulating—although it is odd, given the novel’s righteous stand against racism, that the original Bezellia’s claim to fame was fighting Indians.

An off-putting mix of stereotypes and platitudes in an unconvincing plot.