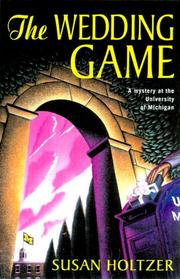 If you’re looking for a lightweight read, you might want to "Sign On" to Susan Holtzer’s (The Silly Season, 1998, etc.)

fourth University of Michigan adventure for computer designer Anneke Haagen. The problem is, you’re likely to hit the "Del" or "Esc" key long before the anticlimactic final entry. Five days before she’s to marry Ann Arbor police lieutenant Karl Genesko, an ex-football player, Anneke finds herself and Karl prime suspects in the letter-bombing death of a "vicious, nasty, self- absorbed" on-line correspondent, fellow software-game designer Vince Mattus. Six other members of a GameSpinners team also come under suspicion when a list beside Vince’s computer shows them as part of his Blackmail Game. As wedding preparations continue, the Group of 7, Karl, and some very aggressive FBI agents play a sort of fun (if it weren’t so deadly) on-screen Wedding Game in an effort to catch Mattus’s murderer. A good gimmick goes stale fast when Holtzer spends the bulk of the story with on-screen GameSpinners’ characters as flat and unexciting as "high-tech paper dolls." Off-screen characters like "maid of honor" Michael Rappoport and Anneke’s insufferable radical and veggie-environmentalist daughters season the pot, but, for the most part, many readers might want to "Sign Off" before the crime source is exposed. Premarital mayhem threatens postnuptial bliss, yet readers may scroll quickly when the computer-games group is hit by the