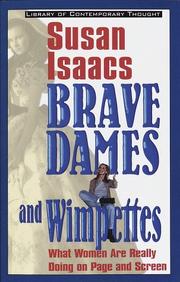 What Women Are Really Doing on Page And Screen

A lively look at the role models provided by women in film and fiction, with unexpected exegeses from a bestselling novelist (Red, White, and Blue, 1998, etc.). L. Frank Baum’s Dorothy and Jane Austen’s Emma—in both original and modern interpretations—are “brave dames”; Sandra Bullock in Speed, although her character was the driver of the rampaging bus, and Anita Hill, testifying about long-past transgressions, are “wimpettes.” Even the feminist icons Thelma and Louise and biblical mother Eve get ambivalent reviews here. Think about it, says Isaacs: Thelma and Louise would rather drive off a cliff than take responsibility for their actions; Eve knuckled under to the serpent rather than take a stand in the cosmic battle between good and evil. Brave dames are “passionate about something besides passion,” are resilient, competent, moral, and “a true friend.” In literature, Jane Eyre is the bravest of dames, along with the spider Charlotte of E.B. White’s Charlotte’s Web. The author’s TV heroines include Buffy the Vampire Slayer and Xena (although production values are seriously deficient, Isaacs admits); films offer Auntie Mame, G.I. Jane, and Clarice Starling of The Silence of the Lambs. Wimpettes, on the other hand, are invested in masochism, subterfuge, low ethical standards, and men who will give them identities. Holly Hunter’s character in The Piano is a wimpette par excellence’she betrays her husband (and daughter) because she “just needs to get laid.” Other mothers, sisters, and friends fare slightly better but fail the “brave dames” test because their lives are defined by men. Isaacs falters on her own test when she sets males as the standard in comparing buddy films, e.g., Midnight Cowboy vs. Thelma and Louise. A lightweight overview of women in film, fiction, and video, but the author offers a challenge: Look closely. Is driving a bus over the speed limit really an example of the best a woman can be? (Author tour)