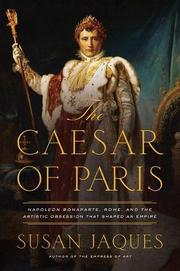 THE CAESAR OF PARIS

Napoleon Bonaparte, Rome, and the Artistic Obsession that Shaped an Empire

Voluminous chronicle of Napoleon’s fanaticism about Roman antiquity and an ample catalog of his empire’s acquisitions.

A journalist specializing in art and docent at the J. Paul Getty Museum in Los Angeles, Jaques (The Empress of Art: Catherine the Great and the Transformation of Russia, 2016, etc.) evidently has the eye and relish for the objet d’art, as she gives exhaustive treatment to Napoleon’s studied appropriation of Roman imperial ritual, style, and trappings. His mythomania compelled him to dizzying heights of cultural plunder and enrichment. His conquering model was, of course, Caesar (and before him, Alexander the Great), whose triumphal processions through Rome bearing priceless booty from vanquished lands Napoleon re-enacted through the festooned streets of Paris once he consolidated power. Masterpieces seized during the Italian and Egyptian campaigns, unceremoniously ripped from temples, galleries, and altars, were relocated to Paris and displayed ceremonially for public “morale and patriotism,” since France alone was the civilized heir to the ancient civilizations. Jaques moves chronologically over 15 years, from Napoleon’s Consulate to Imperium and attempted dynasty, to record the systematic construction of his “New Rome” in Paris. He employed the work of artist Vivant Denon and designers Charles Percier and Pierre-François-Léonard Fontaine, among others, to set the neoclassical tone at his court and palaces like Malmaison and Saint-Cloud. As Jaques amply shows, the empire’s style was defined by Greek and Roman motifs in furniture, medallions, and jewelry; short hairstyles; and modest gowns in expensive French textiles. Meanwhile, Italian sculptor Antonio Canova created canonical neoclassical works like Napoleon as Mars the Peacemaker. Framed by the historical context, the author’s accretion of detail both impresses and becomes tiresome, spilling over into grand schemes of architecture like the Arc de Triomphe and Madeleine Church, Hadrian columns and Egyptian obelisks, and aqueduct systems modeled on Rome.

A massively ambitious compilation of history and stuff that will appeal to students of Napoleon and art history buffs but overwhelm general readers.