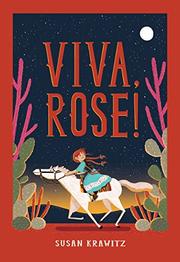 Rose is 13 and living in El Paso, Texas, in 1915 when she sees a newspaper photograph of Pancho Villa. This is not unexpected for the times; the surprise is that her brother Abraham is in the picture. Rose’s family has immigrated from Czarist Russia, but unlike so many other Jews, they settled in the West. Abraham had told his family that he wanted to be a cowboy. Instead, Rose sees that he has “gone off to be a low-life bandit in a cowboy hat.” Rose’s parents are strict with her, but, nonetheless, she tries to get a letter to Abe and is kidnapped by Villa’s men, ending up in his camp. There, the red-haired young white girl encounters Villa, his very spoiled and lonely daughter, the journalist John Reed, and, finally, her brother. The two celebrate a very unusual but spiritual Passover Seder. Krawitz has based her tale on family stories and infuses it with details of Villa’s hideout and the lives of Jews in an atypical setting. Rose is a determined character who gains a more mature understanding of her family and faith, her fellow townspeople, and Villa through her adventures.

Politics and prejudice against Mexicans makes this coming-of-age tale stand out from its ilk.