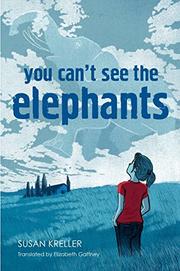 YOU CAN'T SEE THE ELEPHANTS

Seeing evidence that a neighbor’s children are being abused, a young teenager looks for adult help and finds none in this disquieting German import.

Summering with her grandparents in a quiet small town and largely left to her own devices, 13-year-old Mascha is shocked to see bruises and other wounds on the two children—Julia, 9, and 7-year-old Max—of the local car dealer. After later witnessing a violent scene through their window, she hastens to tell her grandma, who responds with a blanket denial: “They’re good people. Everyone here knows that. Those things don’t happen here!” Despite similar responses from other adults, she nerves herself for a 911 call but (realistically) is so nervous and inarticulate that she’s dismissed as a prankster. In desperation, she kidnaps the children with a wild story about their parents being suddenly called away, locks them in an abandoned house, and struggles to keep them quiet and fed. Unsurprisingly, this ill-conceived scheme turns nearly to disaster when searchers find the supposed runaways. Kreller delivers a powerful tale centered on three young people who are out of their depth (“When Daddy whips us, he has a reason,” insists Julia, fierce and secretive) and get no help from a community that, like most, values peace and privacy over all.