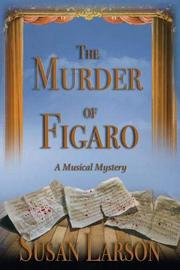 THE MURDER OF FIGARO

Murder and mayhem threaten to derail the premiere of The Marriage of Figaro in this mystery.

It is April 21, 1786, and the first stage rehearsal of Mozart’s Figaro is about to begin in Vienna’s Court Theater. The opera is based on Beaumarchais’ anti-royalist play written in 1778 and banned but widely read in Vienna. The room vibrates with excitement and more than a little salacious gossip. The melodramatic cast chatters away while assorted Viennese court luminaries indulge in contemptuous snickering. The composer, nervous but resplendently attired and meticulously coiffed, gives the signal to raise the curtain. A piercing scream rings out as a dangling body descends, entwined in the rigging. Herr von Haegelin, “the Imperial theatrical censor,” has evidently committed suicide—or was he murdered? So begins Larson’s (Sam, 2012) ribald, clever romp, a narrative brimming with lust, rivalry, deception, scandalous liaisons, and palace intrigue. The novel is written in the form of an opera, divided into Overtures, Acts, Scenes, and a concluding Stretto rather than chapters. Mozart’s friend and librettist Lorenzo Da Ponte, “Court Poet to the Italian theater,” is arrested on trumped-up charges and eventually accused of killing von Haegelin. Mozart is distraught, obsessively concerned with the premiere of his opera on the Viennese stage. He passionately bemoans his fate to his wife, Constanze, saying of Da Ponte: “I need him desperately to do the mise-en-scène and general diva pacification and crowd control! Some devilish plot is being worked to spoil my play!” Together, they strive to uncover the truth behind von Haegelin’s death. It is not necessary to be well versed in opera to enjoy Larson’s scathing portrait of demanding divas, pompous tenors, and an emotionally overwrought, albeit genius, composer. But some familiarity helps. The frequent use of genre-specific terminology and untranslated pieces of dialogue in Italian and French are likely to frustrate many readers. Nonetheless, there is plenty to like in this rollicking, madcap story: historical details about the rebellious political forces sweeping the continent, vivid depictions of 18th-century styles and prejudices, and a naughty sense of humor.

A delightfully irreverent opera tale that should especially appeal to Mozart fans.