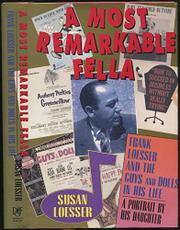 A MOST REMARKABLE FELLA

Frank Loesser and the Guys and Dolls in his Life

Engaging life of brilliant lyricist, songwriter, and composer Frank Loesser (1910-69), whose genius with words brings life to this loving biography by his daughter (a journalist, editor, geologist, etc., who's been published in Life and Family Circle). Much of the charm here lies in Frank Loesser's never failing ingenuity as Susan Loesser quotes his lyrics, letters, and notes for stage productions. The composer spent his life in the emotional shadow of his older brother Arthur, a gifted classical pianist and teacher, and of their mother, Julia, for whom young Frank's Pulitzer-winning Broadway endeavors lacked intellectual refinement. Loesser could never satisfy either family member, even when his most ambitious work, The Most Happy Fella, was praised for its immense variety of musical forms and operatic scope. Loesser, though an apparent egomaniac, thought himself a comparative failure and would put himself down as just an entertainer writing for the moment, future glory not required. Meanwhile, the composer's first wife, Mary, Susan's mother, who was ``pathologically meticulous,'' survived her divorce from Frank by resorting to alcohol and working as a tough-talking Broadway producer. Loesser was a famous Hollywood lyricist before making the big leap to Broadway with Where's Charley?, writing both music and lyrics, then with the quintessential New York musical, Guys and Dolls, his greatest hit. Throughout, the author quotes passages cut out of her father's shows, including from How to Succeed in Business Without Really Trying. The composer died of cancer at 59—when, we learn, he was already being swamped from all sides by detested rock music that was making him old hat. Though foulmouthed, Loesser grows on you wonderfully through his daughter's eyes.