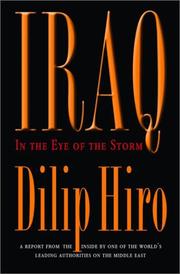 In the Eye of the Storm
by Dilip Hiro
BUY NOW FROM
AMAZON
BARNES & NOBLE
GET WEEKLY BOOK RECOMMENDATIONS:

A scrupulous and discerning vest-pocket contemporary history of Iraq from a writer with a well-earned reputation for evenhandedness (Neighbors, Not Friends, 2001, etc.).

Hiro does an elegant job of situating Iraq within the political economy of its region, commenting on the country’s role in American foreign and domestic policy, and considering the effects of the embargo, with its multifarious implications. All of this is no easy matter, requiring Hiro to make sense of a tangle of connections, many leading back to US actions. The background material becomes more detailed with the Iran-Iraq War, followed by a discussion of the Gulf War and the geopolitical decision not to remove Saddam from power. Hiro looks closely at the sanctions and the way the blame for their effects, once hoped to be laid at the doorstep of Saddam Hussein, has now shifted to the US; how that fact will influence any unilateral act of war on America’s part; how shortages of food and medical supplies have hurt the Iraqi citizens; and how an embargo on news and literature have isolated the Iraqi middle class and kept them out of touch with the rest of the world. There’s an examination of the evolution of the Baath party from progressive to repressive institution, and Hiro explains the conflicts between US officials and UN inspection teams. He doesn’t question that Saddam is a murderous blot on the political landscape of the Middle East, but he does question the US’s aggressive pursuit of the embargo, activities outside the UN mandate, and neo-conservative agenda of “increased spending on defense under the rubric of enhancing national security”; after all, US hawks have never satisfactorily established Iraq’s terrorist threat, though willing now openly to flout international law.

Under Hiro’s steady and searching light, no political interest emerges from Iraq’s recent history without blood on its hands or egg on its face, while, it seems, interest in the Iraqi people has fallen off the radar.

COLD WAR IN THE ISLAMIC WORLD
by Dilip Hiro
Nonfiction

THE AGE OF ASPIRATION
by Dilip Hiro
Nonfiction

NEIGHBORS, NOT FRIENDS
by Dilip Hiro

A DISAPPEARANCE IN DAMASCUS
by Deborah Campbell
Indie