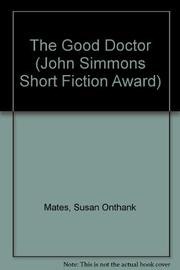 Mates uses her experience as a practicing physician to make sensitive and insightful comment on the nature of healing. Each of the 12 stories in this slim debut evokes a weighty world filled with sadness and hope as men and women coping with failures and losses find the unexpected light at the end of the tunnel. But Mates is candid enough to offer no happy endings. As each character struggles with such harsh realities as political exile, cancer, betrayal, suicide, or lovelessness, release and salvation are attained only through suffering: A concert cellist and teacher fails a brilliant student for political reasons and suffers the guilt of her subsequent suicide for years until he purposefully cuts his finger and can never play again (``Juilliard''); a man loses his college-age son to wanderlust, and as his wife and family crumble, he finds an exciting new freedom (``Brickyard Pond''). Often, Mates incorporates her knowledge of medicine, offering a close-up of illness, trauma, and death, as well as a refreshing look at the healing potential of caregiving. For example, a young physician, contrary to all medical convention, advises an old man destined to die of cancer to forgo the painful, and probably pointless, therapy and learns that while she may not be a good doctor, she is a good person (``Laundry''). And in the powerful title story, the head of a hospital's medicine department allows herself to be seduced by a young, careless student who wants to blackmail her into passing him and experiences a reprieve from spinsterhood and the strict rules she had always forced herself to live by. Unfortunately, this collection of honest, profound tales is marred by the inclusion of a couple of stream-of-consciousness pieces that turn strong tales of teenage conflict (``My German Problem'') and a contagious disease specialist's battle with AIDS (``These Days'') into virtually meaningless drivel. Still, Mates possesses an extraordinary bedside manner.