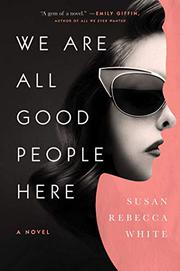 WE ARE ALL GOOD PEOPLE HERE

The 1960s, as some chroniclers have noted, were nothing less than days of rage for many young men and women suddenly awakened to troubling political realities: overt racism and a violent, divisive war, both provoking an urgent pressure to act morally, to take a stand, “to dig out the rot.” But the upheaval of the '60s was not only political: Especially for women, ethical choices were complicated by love, sex, and, not least, money. White (A Place at the Table, 2013, etc.) handles that complexity with gentleness and empathy in a novel that follows the divergent paths of two friends: Evelyn Elliot Whalen, the cosseted daughter of wealthy, politely racist Atlantans, and Daniella Gold a middle-class, liberal Unitarian whose father is a Jewish professor. In 1962, they happily find themselves roommates at a small Southern women’s college that, the girls discover, holds onto some discomfiting customs: The top sorority refuses to accept Jews, for one; and African American maids, living in the basement of each residence house, clean students’ bedrooms and do their laundry. Eve, eager to take up a cause, protests their working conditions to the college’s headmaster, a gesture that backfires, as the more circumspect and pragmatic Daniella knew it would. Her “silly friend,” she reflects, “thought she could splash and kick her way into an ocean of oppression and instantly change the tide.” Eve continues to kick and splash after they both move to New York, become involved in CORE, and apply to join the Student Nonviolent Coordinating Committee in registering voters in Mississippi. Daniella worries about the danger: “We should only take actions that are safe?” Eve asks, a question they continue to confront as they struggle to shape their role in the world. Drawing on memoirs, biographies, and histories, White vividly portrays the fractious radicals—such as Eve’s arrogant, manipulative lover—dedicated to smashing “bourgeois notions and attitudes” as well as the trajectory that some of those ardent rebels took in the 1970s and '80s.