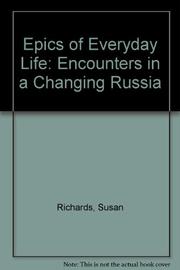 Encounters in a Changing Russia

Richards, a British journalist, film producer, and one-time student of Solzhenitsyn, offers an eloquent narrative of her encounters with Soviet citizens, and ambivalent insights into the impact of glasnost and perestroika on ordinary Soviet people. Americans tend to view Gorbachev's reforms as an unqualified good. By contrast, Richards's conversations with Soviets demonstrate the exhilarating but disorienting effect of democratization upon people who have lived under a totalitarianism that deprived them of the right to think for themselves or to learn their own history. In the beginning, Richards repeatedly expresses amazement at the apparent irrationality and senselessness of much of Soviet society; ultimately, she finds the explanation for this quality in the distorting effect of official ideology on the thoughts and behavior of the Soviet citizenry. Richards describes the peculiarly Russian mixture of idealism and cynicism prevalent throughout Soviet society, and the alarmingly vicious anti- Semitism embraced even by intellectuals to explain the atrocities of the Soviet era. Her portraits include an affecting depiction of Andrei, who although initially xenophobic and suspicious, gradually warmed to her as he learned she was not a ``class enemy'' after all; Pavel, an Orthodox ``Old Believer'' who insights into the paradoxes of Soviet power were more accurate than those of more ``contemporary'' Soviets; and Kukobaka, the dissident whose internal exile was a disturbing reminder that ``thoughtcrime'' is still an offense in the Soviet Union. Thoughtful and beautifully written portraits of Soviet people in a time of radical change.