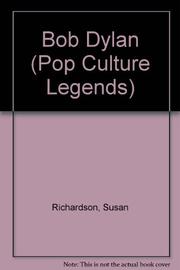 A competent biography in the Pop Culture Legends series that covers the factual tinder, but misses the charismatic spark. Richardson traces the rock luminary's epic musical history, from his early days as a folk troubadour to his current status as rock god. She points out that Dylan has never been one to maintain the status quo; his musical journey reflects his personal beliefs. His outspokenness has attracted and offended fans, critics, and girlfriends alike; Richardson walks a fine line here, telling what happened, but not why. Spitz's Dylan: A Biography (1989) goes into detail about Dylan's relationship with Joan Baez, his failed marriage to Sara Lowndes, and his biting cynicism, often turned on loved ones. Though this book is one-sixth the length of the other, the text is flat; it's more of a term-paper resource than an enticing biography. Readers may prefer it for its size, but it mostly reiterates information found in earlier works, without new insight into Dylan's art. A further reading list includes other biographies, but not periodical citations (where Dylan's own words can be found). (b&w photos, index, chronology, further reading) (Biography. 11+)