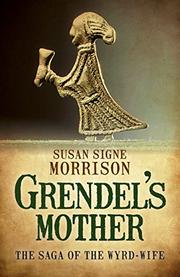 The Saga of the Wyrd-Wife

Morrison’s (The Literature of Waste, 2015, etc.) historical novel explores the legend of Beowulf.

On the shore of the land of the Scyldings arrives a baby found in a boat of foreign make, swaddled in salt-encrusted blankets, and accompanied only by a silver spoon, an illuminated book, and a piece of gold jewelry. The foundling is taken in by a local fisherman and his wife, who name her Brimhild. The young king, Hrothgar, sanctions the adoption, though the king’s mother is sure that the alien girl will bring only misfortune to the land. From a local “mere-woman” Brimhild learns the lore of the land and its magic. From a traveling Irish monk she learns of a religion that worships a pitiable, gentle god. Brimhild grows to adulthood, rising to a place of prominence among her new people: she becomes the wife of Hrothgar and oversees the construction of Heorot, an immense hall that becomes the pride of the Scyldings. She bears the king a son, Grendel, a sensitive child she raises secretly in the faith of Christ. Yet Brimhild sits at a crossroads between old ideas and new ones, and the truth of her origins threatens her placement at the head of her adopted tribe. Her betrayal and fall from grace give birth to a new set of stories, one in which she and her son are defamed for all time. Morrison writes in alliterative, lyric prose that evokes the Old English of her source text: “There she saw the soft seaweed, barnacled bed, of a marine monster. Leaving her work, approaching with caution, she listened for linnets along the lime lane.” An incredible world is spun out of blunt, staccato words: a world of customs and objects, of heroes and faiths, and, of course, of monsters. Morrison manages to update the medieval morality of the original poem while preserving its mournful sense of the old ways passing away.

An enchanting, poignant reimagining of Beowulf.