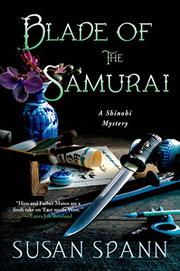 BLADE OF THE SAMURAI

A master ninja’s sleuthing skills involve him in a dangerous plot to kill the shogun.

Hiro Hattori is charged with protecting the Portuguese priest Father Mateo, a Jesuit with a love for the lower castes of Kyoto and a talent for solving problems. When Shogun Ashikuga’s cousin Saburo is stabbed to death at the palace, Matsunaga Hisahide and his assistant, Miyoshi Akira, want Father Mateo to find the killer. Unfortunately, they’re already convinced they know who did it: Hiro’s fellow ninja Ito Kazu, who’s working undercover in the palace. Kazu’s dagger was the murder weapon, and he’s secretly come to Hiro for help. He won’t tell Hiro where he was on the night of the murder, but after they concoct a tale of his being dead drunk, he returns to work, pleading innocence. The other suspects include Saburo’s homely wife, who’s put up with his many mistresses for the sake of her son and her position. Saburo’s latest conquest is a maid at the palace with an eye for the main chance and a plausible packet of lies about the affair. The stable boy who loves her also had reason to kill Saburo. With rival warlord Lord Oda ostensibly on his way to visit, the shogun and his staff are on high alert, but that may not be enough to save the shogun from a plot within his own palace. If Hiro and Father Mateo do not name a killer, their heads will roll.

Hiro and Father Mateo’s second adventure (Claws of the Cat, 2013) combines enlightenment on 16th-century Japanese life with a sharp and well-integrated mystery.