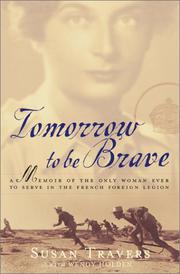 TOMORROW TO BE BRAVE

by Susan Travers with Wendy Holden

An extravagant tale of war and romance, with a decided emphasis on the latter.

Now in her 90s, Travers writes in an “I shall never forget” mode. With remarkable recall, she describes her cold English upbringing and portrays the tenor of society life in Cannes during the 1930s. In 1940 she changed her tennis whites for nurses’ khakis and joined the Free French—who, apparently, were free in lots of ways. She was soon chauffeuring officers in Eritrea along the road to Kub-Kub (a map is provided), but she managed to find the time for various randy encounters and assignations. The liaisons are presented as guileless romance, mind you, not actual sex. Under the nom de guerre of “La Miss,” Travers served as the driver for General Pierre Koenig—a dashing officer who soon became the love of her life. She was with him at Bir Hakeim when that North African outpost was besieged by Rommel; with her General in command, La Miss guided the historic breakout. Her description of the drive, negotiating between land mines and flying bullets, is the central and best part of her story, which really has less to do with military history than romance. She lived with lucky Pierre in domestic bliss during much of the war—but the joy faded with the arrival of the General’s wife. After the war, La Miss became an authentic member of the French Foreign Legion, married a fellow soldier, and raised a family. Now she’d like to tell her grandchildren “what a wicked grandmother they had.” It’s all a bit melodramatic, full of old-fashioned schoolgirl romance, but this is not “Barbara Cartland Goes to War”—for Cartland surely never received, as La Miss did, the Croix de Guerre and the Médaille Militaire.

Decked out like a history, with index and bibliography: a striking, romantic, personal narrative.