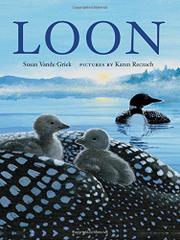 The life cycles of two baby loons are presented in this lyrical picture book.

One late June day, a gray chick pecks and pecks her way out of her large green-and-brown spotted egg. A short time later, she has a little brother. They stay in the nest for about a month, then are ready to test the waters, literally. Sometimes they can ride on a parent's back to rest and dry off. In summer, there are dangers on the water, such as people; the offspring learn to dive deep for fish like their parents. As fall turns to winter, the parents fly away, leaving the young to fend for themselves. They grow strong and take flight just before the lake water freezes, finding a new home on the ocean with a loose flock of others. It takes a few years, but eventually the gray feathers molt an are replaced by "checkered, striped, spotted / white and black." Now they are ready to become parents themselves and begin to listen for that distinct mating call. The book concludes with an informative essay about the loon, illustrated with depictions of five varieties, and suggestions for further reading. Reczuch's beautiful acrylic on-canvas paintings, 19 two-page spreads in all, themselves tell the story eloquently. Vande Griek's text is deft and minimal, yet, despite its free-verse form, still feels too prosaic, given the drama of the pictures.

Though the book's two components coexist uneasily, each is notable, and children in loon country will be fascinated by such a thorough exploration.