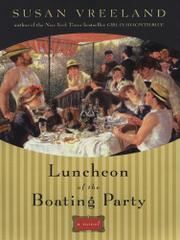 LUNCHEON OF THE BOATING PARTY

In her fourth art-related historical, Vreeland (Girl in Hyacinth Blue, 1999, etc.) provides an in-depth look at one of Renoir’s most famous paintings (its name is her novel’s title).

Maison Fournaise, on the Seine outside of Paris, is one of Renoir’s favorite haunts. One July day in 1880, the 39-year-old artist is at the restaurant/hotel/boat rental when he reads a Zola essay critical of the Impressionists. It goads him into action. He will paint a scene of boaters on the upper terrace, a wide canvas work that will surpass his Montmartre spectacle Bal au Moulin de la Galette. But time is short and money is tight. He has just two months to take advantage of the summer light. He must find money for paints, for modeling fees and for eight Sunday luncheons for his group. The female models must be women he could love. Alphonsine and Angèle are naturals; the former is the owner’s daughter, the latter a bawdy child of Montmartre; both women glow with vitality. He adds the self-styled Circe, beautiful but temperamental, foisted on him by a salon hostess; she will provoke a crisis when she quits, refusing to be done in profile. Renoir finds a miraculous replacement in Aline, a 19-year-old seamstress he will marry, years later. There are other model problems: One man is involved in a duel; there is constant anxiety over the total number (13 must be avoided). Vreeland maintains the suspense while skillfully providing context. The traumas of the Franco-Prussian War and the Paris Commune are only ten years distant; Alphonsine is a war widow, a male model is a wounded veteran. The politics of the art world are unremitting; the once-cohesive Impressionists are now split three ways. Degas mocks Renoir for seeing life through rose-colored glasses; too bad. Joyful conviviality is as valid as squalor. The finished product affirms Renoir’s credo: “Art was love made visible.”

Vreeland’s love for Renoir is made palpable in this brilliant reconstruction.