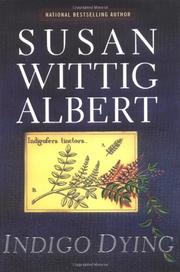 Herbalist China Bayles (Bloodroot, 2001, etc.) has launched a series of workshops about dyeing textiles with natural ingredients with her old friend Allie Selby, who raises angora goats and grows dye-producing plants on a farm near a little town called Indigo. (No, really.) China and her sidekick Ruby Wilcox head up to Indigo and Allie’s farm for a Colors To Die For Workshop and the Indigo Arts and Crafts Festival, sponsored by the Historical Indigo Restoration Committee (HIRC), to which Allie and key Indigo business owners belong. As part of the festival, HIRC is also producing a historical play written by Allie’s live-in boyfriend, writer/drifter Derek Cooper. But the festivities suddenly darken when Casey Ford, Allie’s uncle, announces that he’s sold his mining rights to a company that plans to strip-mine Indigo, effectively burying the economic and cultural revival, not to mention the beautiful natural surroundings, including Allie’s farm, under a layer of brown. Members of HIRC see red, and former lawyer China is blue. When Casey is shot dead during a performance of Cooper’s play, Indigo lightens up, but law enforcement isn’t convinced that Casey walked into his own shotgun booby-trap by accident. Color Allie and her cohorts suspicious, so China, with the help of Ruby’s psychic gifts, investigates to find the real culprit.

China brews a restful—some might say soporific—cup of herbal tea for her fans, while Wittig earnestly shares her research into a rainbow of folklore, herbalist traditions, and strip-mining.