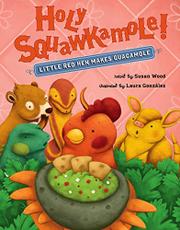 Somewhere in southern Mexico a hen (who is, of course, little and red) is hankering for some guacamole.

But her otherwise-occupied neighbors, who all agree that “Nothing beats a tasty guacamole,” won’t join in the gathering of the essential ingredients. The coati’s “hanging out,” the snake’s “all tied up,” the armadillo’s “gotta jump,” and the iguana is working on a tan. The hen manages to gather everything she needs, including one giant, red jalapeño—concealing it from the genial but unhelpful cast of characters. When the guacamole is shared all about, the chicken’s secret ingredient has her friends blowing their tops. “ ‘HOLY SQUAWKAMOLE!’ they all hollered. ‘THAT’S A SMOKIN’ HOT GUACAMOLE!’ ” Wood’s retelling of this well-known tale of reaping what you sow meanders along, raising questions throughout. Why are masa and cumin mentioned on the first page when neither is needed to make guacamole? Another puzzle arises from the author’s choice for the protagonist. She makes a point of selecting animal sidekicks native to Mexico but misses an opportunity to use the native turkey instead of the standard chicken. Also, there is both misinformation in the appendix (Aztecs did not use cilantro; it likely arrived with the Spaniards) and the confusing addition of Japanese, French, and Caribbean spins on guacamole. González’s colorful digital art is generically cute but as texturally flat and lackluster as the story itself.

Not, alas, as tasty as its topic.