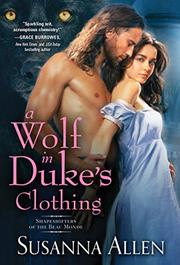 A WOLF IN DUKE'S CLOTHING

A duke who’s a real alpha finds his true love.

The Honorable Felicity Templeton has one goal, and it’s an unusual goal during the season of 1817: to remain single until she's 25 in order to inherit a fortune. She’s only weeks away from achieving this when, tucked into the wallflower corner at a ball, she runs into a “Cravat of Perfection” and soon after is kidnapped by Alfred Blakesley, Duke of Lowell. The duke is so insistent because, after he senses her across the ballroom, he knows she is his “vera amoris” and he must have her. This isn’t typical toxic masculinity; Alfred is a wolf Shifter, and, what’s more, he’s the alpha of an unusual pack and anxious to secure his one true love in order to stabilize their community. Of course, this knowledge is too much for a first date, particularly when that date is in the carriage of one’s kidnapper, so his staff agrees to wait to reveal their true natures. Felicity is quickly won over by the duke’s marvelous house, and as she slowly gets to know the duke, she begins to accept him, even if his unfamiliarity with human courting rituals proves a hurdle. Though she senses something odd about her new household, her own eccentricities and natural inclination for animals keep her from being too suspicious, and when the truth finally outs, she is oddly accommodating, with tension coming from other places. Combining equal parts Regency and shifter romance, Allen ably integrates elements from each subgenre in this first volume of her Shapeshifters of the Beau Monde series. Realistic period detail is complemented by shifter concepts like “dominatum” and “sentio” and accompanied by sparkling dialogue and steamy chemistry, so that even as the plot grows darker, the story is leavened by an inherent lightness that perhaps only a shifter romance set on Regency pages can provide. Though lovers of traditional Regencies may find the story strays too far beyond the boundaries of the ton, many will enjoy this new approach to well-known tropes—a book that respects both subgenres and, in doing so, may well create a new one.