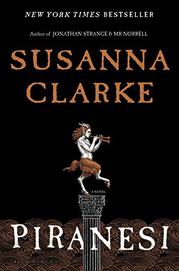 The much-anticipated second novel from the author of Jonathan Strange and Mr. Norrell (2004).

The narrator of this novel answers to the name “Piranesi” even though he suspects that it's not his name. This name was chosen for him by the Other, the only living person Piranesi has encountered during his extensive explorations of the House. Readers who recognize Piranesi as the name of an Italian artist known for his etchings of Roman ruins and imaginary prisons might recognize this as a cruel joke that the Other enjoys at the expense of the novel’s protagonist. It is that, but the name is also a helpful clue for readers trying to situate themselves in the world Clarke has created. The character known as Piranesi lives within a Classical structure of endless, inescapable halls occasionally inundated by the sea. These halls are inhabited by statues that seem to be allegories—a woman carrying a beehive; a dog-fox teaching two squirrels and two satyrs; two children laughing, one of them carrying a flute—but the meaning of these images is opaque. Piranesi is happy to let the statues simply be. With her second novel, Clarke invokes tropes that have fueled a century of surrealist and fantasy fiction as well as movies, television series, and even video games. At the foundation of this story is an idea at least as old as Chaucer: Our world was once filled with magic, but the magic has drained away. Clarke imagines where all that magic goes when it leaves our world and what it would be like to be trapped in that place. Piranesi is a naif, and there’s much that readers understand before he does. But readers who accompany him as he learns to understand himself will see magic returning to our world.

Weird and haunting and excellent.