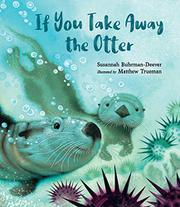 IF YOU TAKE AWAY THE OTTER

Sea otters are the key to healthy kelp forests on the Pacific coast of North America.

There have been several recent titles for older readers about the critical role sea otters play in the coastal Pacific ecosystem. This grand, green version presents it to even younger readers and listeners, using a two-level text and vivid illustrations. Biologist Buhrman-Deever opens as if she were telling a fairy tale: “On the Pacific coast of North America, where the ocean meets the shore, there are forests that have no trees.” The treelike forms are kelp, home to numerous creatures. Two spreads show this lush underwater jungle before its king, the sea otter, is introduced. A delicate balance allows this system to flourish, but there was a time that hunting upset this balance. The writer is careful to blame not the Indigenous peoples who had always hunted the area, but “new people.” In smaller print she explains that Russian explorations spurred the development of an international fur trade. Trueman paints the scene, concentrating on an otter family threatened by formidable harpoons from an abstractly rendered person in a small boat, with a sailing ship in the distance. “People do not always understand at first the changes they cause when they take too much.” Sea urchins take over; a page turn reveals a barren landscape. Happily, the story ends well when hunting stops and the otters return…and with them, the kelp forests.

A simple but effective look at a keystone species.