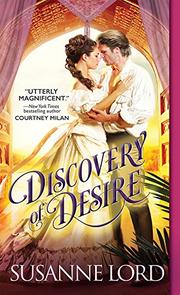 How do two lovers, with nary an aristocratic title or fortune between them, find their happy-ever-after in 1850s Bombay and London?

In this lovely historical romance, Lord (In Search of Scandal, 2015, etc.) presents her protagonists with the challenge of joint penury. Seth Mayhew is a world explorer who finds botanical specimens for the avaricious East India Company but has little to show for it except a cottage in need of repair. His current voyage to India, moreover, is not for work but to search for his missing sister and an orphaned baby. Wilhelmina "Minnie" Adams is one of several indigent sisters and has sailed to Bombay to marry a company bureaucrat in order to save her family from ruin. When she and Seth meet, the chemistry is unmistakable, but the question of how they could be together without ending up hungry and homeless haunts them both. From such untenable circumstances, Lord builds a tender, layered narrative, shot through with moments of pathos and pleasure. When Minnie consoles Seth following his bewilderment at the East India Company’s indifference to his sister’s fate or when he sacrifices his heart for Minnie and her family’s financial security, the novel distinguishes itself from the run-of-the-mill Victorian romance. Lord is even able to present a fairly accurate picture of 19th-century Bombay through descriptions of neighborhoods and the use of dialogue in Marathi; these touches enhance the plot rather than serving as exotic color, always a threat in novels set outside the Anglosphere.

If you like your romance with the sweetness of Mary Balogh’s novels or the anguish of Sherry Thomas’, this is one to cherish.