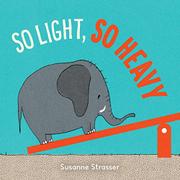 SO LIGHT, SO HEAVY

An elephant stands on one end of a teeter-totter, hoping to play, but the other end is empty, so it doesn’t tip. One by one, a number of animals climb on: a penguin, a monkey, an ostrich, and a giraffe. And still the teeter-totter won’t tip. “Elephant is so heavy,” and the other animals “are so light.” Even when a hippopotamus climbs on it doesn’t tip—now both sides are equally weighted. A humorous and unexpected solution comes along in the shape of a trumpet-blowing blond, white child pulling along a sauropod on a leash. Standing against an azure blue background, the vivid red teeter-totter takes center stage, its fulcrum aligned with the gutter. The animals are simply drawn yet wonderfully expressive, and their antics on the teeter-totter are downright comical. This English translation from the original German is full of alliteration and onomatopoeic sounds—“ZOOP!”; “ZIPPITY ZAP!”; “TIPPY TOPPY TIP TAP!”—making it a read-aloud delight. Adult readers can encourage animal recognition and naming, prediction, or even a discussion on teamwork and physics.

Such a heavyweight for such a light little book—delightful.