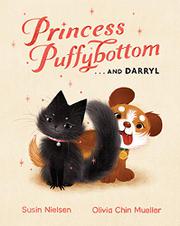 Fluffy, black kitty Princess Puffybottom’s two female “subjects” pamper her appropriately. They feed her yummy meals (even if they sometimes need reminding) and take care of “delicate matters” (litterbox, you know). Princess Puffybottom indulges their whims, the petting and the play, until they surprise her with Darryl, a dog! “He was horrible. He was disgusting. He was an animal!” Illustrating this in sequential vignettes, Darryl eats a sock, vomits it up, and eats it again. The princess tries everything from hypnosis to sabotage to rid herself of Darryl, but nothing works. Her subjects notice nothing of her shenanigans—they seem preoccupied with other matters. Eventually familiarity does its work. Yes, Darryl’s annoying, but Princess Puffybottom finds he has uses (such as liberating tasty morsels from the trash), and he does worship her, so life’s “good again. At least her subjects wouldn’t be bringing home any more surprises.” Readers, however, will have noticed that what her two subjects—a black woman and an Asian woman—have been occupied with in the background are preparations for a baby. Nielsen’s tale and Mueller’s digitally created pooch and puss pair perfectly, the princess acting as a nice stand-in for a pampered first child. The light touch of humor and twist at the end make this a must for storytime collections.

Princess and Darryl need a sequel.