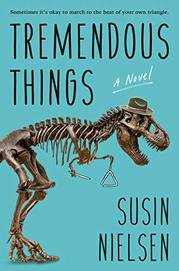 A fat teen gains self-confidence in a quest to get the girl.

Fourteen-year-old Wilbur Alberto Nuñez-Knopf is still trying to recover from his “Number One Defining Moment.” Upon entering seventh grade after being home-schooled, Wil’s deeply embarrassing time-capsule letter was found and shared by a classmate on social media. Now dubbed “Wank” by peers, the straight, White Toronto teen is a social pariah. Wil’s luck starts to change when Charlie, a beautiful French exchange student, is placed at his house for the week. Wil’s feelings for Charlie come fast, but class bully Tyler (the “Chris Hemsworth” to Wil’s “Napoleon Dynamite”) hooks up with her instead. In an attempt to avoid being friend-zoned yet again when he visits Charlie in France, Wil agrees to let his gay friends and 85-year-old neighbor “do a Queer Eye” and make him over. But will it be enough? Nielsen’s quirky portrayal of a sensitive male with a working-class, two-mom family is welcome, and the tone is mostly light and fun. However, many of the characters—unfortunately especially Charlie—lack sufficient depth to move beyond trope territory. Though body-shaming is often called out and at least one fat character is full of confidence and self-acceptance, the repeated use of “some pig” (from Charlotte’s Web) as an affirmation and the intense emphasis on size toe the line between reclamation and fatphobic objectification. There is some ethnic diversity in secondary characters.

Fills a need for representation—but not entirely successfully.