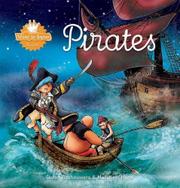 From the Want to Know series

Light scrapings of pirate lore are delivered by two children dressed to the hilt for their roles and leading a ragged but distinctly nonfearsome crew.

Billy and Belle are playing pirates at the beach. Transformed into swashbuckling buccaneers by the flip of a half-page, they proceed to offer ingenuous disquisitions on the nature and history of piracy (“Did you know many pirates steal from other people because they are very poor?”). They also cover piratical dress, behavior, shipboard tasks and lingo, followed by a spot of smoky but nonviolent plundering. Then it’s time to go ashore for a quick chantey, a matching game that encourages drawing lines between pirate heads and hats, and a set of review questions (“What’s the leader of a pirate ship called?”). The text isn’t much more than inconsequential ballast (“It is considered bad luck for girls to be on board a pirate ship. That’s why girl pirates dress up as boys”). Nevertheless, the cleanly drawn, brightly hued cartoon illustrations—climaxed by a double-gatefold cutaway view of a capacious ship crewed by cheery idlers—sail along airily enough to keep budding buccaneers entertained.

A lubberly addition to the fleet, kept afloat by its pictures.