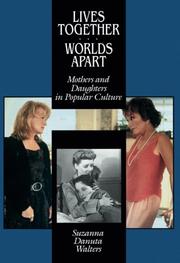 If mother-daughter relationships are socially rather than psychologically or biologically constructed, then the sources of the common paradigms of bonding/separation, love/hate, enmeshment/autonomy are to he found, according to Walters (Sociology, Georgetown Univ.), in films, TV shows, and magazines. ""Mother-bashing,"" Walters says, has dominated these media since the end of WW II, with daughters growing up through rebellion Or self-destruction--encouraged, ironically, by the women's movement that blamed ""mom"" for being neglectful and not nurturing, as well as for being a victim, the symbol of what modern women should hold in contempt. The mother-daughter relationship itself, Walters notes, was overshadowed in the 80's by motherson syndromes, reappearing in the ""backlash eighties"" as an inevitable and natural conflict. Because men are threatened by the mother-daughter relationship, their patriarchal psychology--Freud and his heirs--encourages this plot based on reflection, opposition and conflict. Walters believes that the actual mother-daughter relationship is far more complex than popular culture has depicted it, and that, ideally, it is a nurturing relationship based on mutuality, reciprocity, and humor--as in the TV sitcom Maude. Through her comprehensive--if repetitious and excessively analytical--study, Walters raises seminal questions about the relationship between art and life. But what she fails to see is that popular culture reflects what writers and producers experience, or believe most people experience, and what sponsors will pay for--i.e., an often biased and commercial truth, as the section on the ""reality"" of black women illustrates.