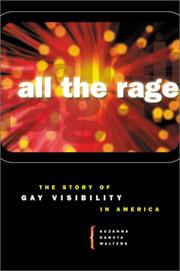 The Story of Gay Visibility in America

Should gays and lesbians exult in the recent spate of media depictions of their lives or shudder at the homogenized sterilization of their diversity?

Against the backdrop of the 1980s and ’90s, Walters (Sociology & Women’s Studies/Georgetown Univ.; Lives Together/Worlds Apart, 1992) analyzes the promise and the threat of queer portrayals in contemporary media: although the number of these programs and personalities has skyrocketed, the resulting depictions of gay and lesbian life often emerge as disturbingly skewed. In a nutshell, her thesis contends that increased gay representations in the media may entail that America sees the gay and lesbian community more frequently than ever; however, due to the stereotypical visions of queer life—such as psycho dykes, ditzy fashion homos, and lesbian chic—this visibility does not correspond with an increased knowledge about homosexuality. With a sweeping range, Walters probes the cultural repercussions of such characters as Dynasty’s tortured bisexual Steven Carrington and the all-too-chaste Matt of Melrose Place, as well as examining specific episodes of programs including Roseanne (when Mariel Hemingway kissed the eponymous heroine) and the coming-out episode of Ellen. Films also come under scrutiny, as Walters considers the differences between queer portrayals in mainstream Hollywood and those in independent films. And there are chapters on gay marriages, coming-out stories, and queer parenting—and an analysis of advertising images of gay and lesbian life, in which Walters dissects the commercialization of the queer community (pointing to a predictable display of gleaming teeth and toned bodies).

A frenetic packing of materials that leaves in-depth analysis mostly sacrificed for a panoramic view—but the resulting picture nevertheless emerges as detailed and refined.