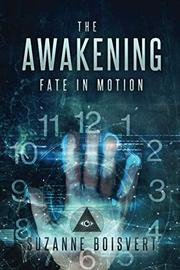 Lanie Montrose is a pop-music superstar with a troubled personal life, known as much for her recreational drug use as for her talent. She’s trying to get clean, but when she overdoses at a party under suspicious circumstances, she’s taken to a clinic in Malibu, California. Soon afterward, Suki Carter, Lanie’s therapist, meets a woman named Becca on the street whom she met at the same party; Becca hands Suki a data stick before she’s killed in front of the therapist in a hit-and-run. Meanwhile, Suki’s childhood friend James Sinclair, a Scottish-born paranormalist and “conspiracy investigator” for the CIA, is tending to his dying mother; he’d long been skeptical of her lifelong ravings about aliens and Knights Templar, but then he sees a strange vision that changes his mind. It’s later revealed that the three main characters have mystical and genetic connections that go back millennia; they’re part of a mass “awakening” going on all over the world as praying mantis–like aliens start mobilizing operatives to prepare for the return of an ancient, evil space being. It turns out that James, Suki, and especially Lanie are key to Earth’s defense against the onslaught. Boisvert drops Danielle Steel–like characters into a New Age–y sci-fi/fantasy plot. Surprisingly, given the planetary stakes, she focuses tightly on her small cast, acutely analyzing the trio’s emotional states as they gradually acclimate to their amazing destinies. She does this so well, in fact, that readers likely won’t wonder too much about whether Lanie is supposed to be Madonna, Britney Spears, or Katy Perry. However, other subplots—about a 9/11–type attack, a pioneering Mars mission, and all the other humans “awakening” to their superpowers—end up being shunted to the margins. More of these details, though, may be forthcoming in future volumes, following this one’s cliffhanger finale.