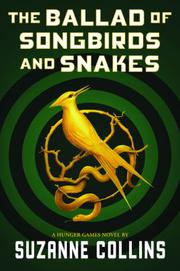 THE BALLAD OF SONGBIRDS AND SNAKES

From the Hunger Games series, volume 4

An origin story for both President Snow and the Hunger Games as we know them.

Coriolanus Snow has the right family name, a prestigious address, talent, and charisma—but unless he wins a prize to pay for university, it’s all for nothing, as his family’s wealth came from the now obliterated District 13. He must succeed in his final project of being a mentor in the Hunger Games, but his District 12 girl tribute assignment at first feels damning. However, Lucy Gray Baird is vibrant and wild, a singer and performer with star power; she’s perfect for Coriolanus, who has been tasked with boosting the grim, lackluster games that, early in the shift from mock war to sporting spectacle, are even more brutal and unpredictable. Coriolanus is pulled between Mengelian Dr. Gaul’s twisted mentorship and connections with sympathetic foils Lucy Gray (which veers romantic) and compassionate classmate Sejanus. Conflicted Coriolanus thinks of himself as a good person in an impossible situation but also as exceptional—a belief with a high price. Collins humanizes him as superficially heroic and emotionally relatable while also using him for a vehicle for philosophical questions. Though readers know how he will eventually answer the questions explicitly asked of him, the central question is why, resulting in both a tense, character-driven piece and a cautionary tale. There is some mention of diversity in skin tone; Coriolanus and Lucy Gray seem to be white.

The twists and heartbreaks captivate despite tragic inevitabilities.