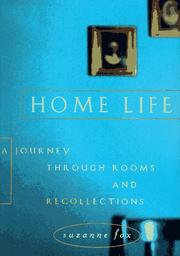 A Journey Through Rooms and Recollections

Reflections on where she's lived and why by a poet and short- story writer. ``I inherited the knack and habit of redecoration from my father,'' Fox remarks, calling him ``a precise and obsessively methodical man.'' Her book, as well as her housekeeping style, seem similar to him. Like a doll's house, this memoir-in-miniature about Fox's various homes is made of detachable, snugly nested parts; clarity and order are its watchwords. Linked yet self-sustaining thematic chapters (``Kitchen,'' ``Playroom,'' ``Sickroom'') invite us in, and Fox's sure sense of pacing draws us easily through her life's passageways and resting places. For example, there's the interval she spent in her friend Liz's studio apartment in Paris. The seventh-storey aerie had ``slanted skylights and a north wall composed entirely of windows,'' and ``a lumpy bed with a worm-eaten Gothic altarpiece, probably faked, at its head.'' Ensconced there temporarily as a nervous American abroad, Fox gradually learned that ``when everything was possible, nothing could be lost,'' and we come along for that journey of quiet personal liberation. Most of the book, though, is spent closer to home, in and around New York. Fox reminisces about her mother's ``junk drawer'' in New Jersey as a symbol of the woman's character; she recounts the revelation of a boyfriend's nearly vacant apartment as a symptom of his duplicity; and she returns now and again to the subject of her own 12-by-18 New York City apartment as ``a profound and essential extension of self.'' Though unsentimental, her memoir serves in part as an elegy to long-gone rooms of the past and the human struggles heating them. And while Fox's tight control as a writer over her domain could bear some loosening, leaving her story a tad less demure and diminutive, the house of her book is sturdy. A nonfiction novel in rooms. (10 b&w line drawings)