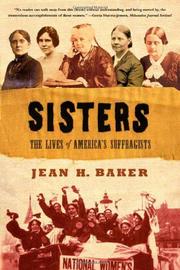 Baker (History/Goucher Coll.; The Stevensons, 1996, etc.) is right to suggest that our view of the suffragists is gray and one-dimensional: “We conflate them into one middle-class overweight white woman with a severe look, hair unflatteringly pulled behind her ears, dressed in a high-necked black dress with a lace collar and cameo pin for decoration.” In fact, she observes, the early feminists were a diverse lot, though with some commonalities—many, for instance, had suffered at the hands of fathers or husbands and therefore understood firsthand the injustices wrought on women by virtue of mere gender. Lucy Stone, Susan B. Anthony, Elizabeth Cady Stanton, Frances Willard and Alice Paul, each of whom Baker considers indispensable to the women’s movement, were quite different, each possessing a different reason for advocating women’s right to vote: Stanton wished to advance women’s rights generally, for example, while her ally Anthony paid closer attention to the rights of working women. Baker carefully traces the origins of these various emphases while linking them to episodes in the leaders’ lives: Stone, foremost a champion of women’s education, attended college against her father’s wishes; it took her nine years to save enough to pay a year’s tuition, but her success there swayed her father to lend her money for the next year. Anthony, no stranger to “same-sex passion,” and Stanton, married for 47 years, forged an alliance of ideas and activism while finding reasons to disagree on many points. And Willard campaigned vigorously not only for women’s rights but also for “sexual purity” and temperance, motivated by the death of a brother to alcoholism and the certainty that women who smoked and danced could have no self-respect.

A lucid account that humanizes historical figures hitherto rolled up into a single image.

THE STEVENSONS
by Jean H. Baker