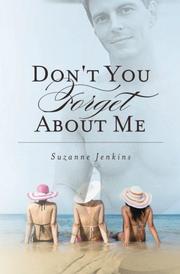 DON'T YOU FORGET ABOUT ME

After a wealthy man of high reputation suffers a heart attack and dies, three women are left to grapple with the aftermath of his death and the twisted details of their past in this riveting fiction novel.

The story, a continuation of Jenkins’ Pam of Babylon (2011), sets out to explore the life and grief of the wife, the sister-in-law and the mistress of Jack, the deceased. From the beginning, the reader understands that all three women are aware of their positions in Jack's life and to each other. Jack's wife, Pam, knows that he was engaged in a long-term affair with her younger sister, Marie. What's more, the mistress, Sandra, is pregnant with his child. But surprisingly, these are not the most shocking twists that Jenkins lays out. Little do the three women know that there is more that ties them to Jack and to each other than meets the eye. As secrets unfold—some deceptive, some deadly—the women are left intimately bound by their past and by a future that can never break free from Jack. Jenkins writes with a fast-paced, scenic style, pushing the story forward and wasting little time on interior monologue or back story. Perhaps this is one of the best aspects of the novel—a page-turner, the story remains immediate, rarely breaking from forward motion. Jenkins develops characters not by describing them, but by placing them in conflict and context with new people, places and situations. What's more, the novel never fully resolves the conflicts it opens up, leaving room for the next book to explore the aftermath of the characters' secrets and decisions. The characters are sympathetic, round and believable; watching them grapple with difficult decisions creates an engaging, dynamic read.

An exciting, surprising story that leaves the reader hungry for the next book.