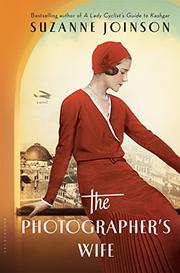 In Joinson’s second exploration of British misadventures abroad (A Lady Cyclist’s Guide to Kashgar, 2012), a lonely 11-year-old in 1920 Jerusalem witnesses and inadvertently participates in adult intrigues, both political and personal, which haunt her later life as a troubled artist.

After her mother’s commitment to an asylum, Prue is living at Jerusalem’s Hotel Fast with her father, Charles, an architect planning a system of English-style gardens for the city. Ignored by Charles, Prue attaches herself to Eleanora, the young British wife of Arab photographer Khaled Rasul, and to Ihsan, who’s been hired to teach Prue Arabic. Encouraged by Ihsan, Prue spies on the adults around her, often misconstruing events and relationships, especially after the arrival of the emotionally damaged British Word War I pilot William, whom Eleanora knew in England. As the arrogant British powers that be reluctantly try to confront an officer running amok killing locals, Prue finds herself in the middle of horrendous violence. Interwoven with Prue’s childhood is the story of her life as an artist and mother back in England. In 1937, Prue has left her foppish British husband, Piers, and lives in Shoreham with her small son, Skip; she's preparing a show of her sculpture when William pays her a visit. A moving, disturbed, and disturbing character in his own right, William tells Prue that Ihsan has died and asks for an envelope Ihsan left with her on a visit to England in 1933. While Joinson layers on a John le Carré–lite plot involving British intelligence, what matters are the memories that flood back for Prue, showing how the demons from her childhood have contributed to both her creativity and her difficulties as a wife and mother. While Prue and William have dark pasts, Joinson wisely allows for degrees of redemption and growth in each.