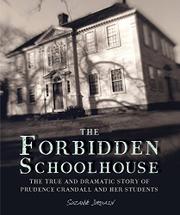 The True and Dramatic Story of Prudence Crandall and Her Students

Prudence Crandall never set out to be a revolutionary—just a teacher. But when she made the bold decision to admit African-American girls to her exclusive girls’ academy in Canterbury, Conn., she made a conscious decision to change her life forever. As the white parents of Canterbury would not allow their daughters to attend school with black students, Crandall closed it altogether, reopening it as a boarding school for middle-class black girls in 1833, with help from her Quaker family and William Lloyd Garrison, among others. It was a short-lived enterprise, however, as opposition both legal and vigilante finally forced her to close less than two years later. Jurmain adopts a storyteller’s voice to tell the tale, lacing it with excerpts from primary sources, but always locating readers in the emotional heart of the conflict. This makes for a fast-paced read; well-placed images depict both the principal players and the interior of the Crandall school (now a museum). Closing chapters fill in the details of Crandall’s later life and sketch the subsequent history of school integration. (appendices, notes, bibliography, index) (Nonfiction. 10+)