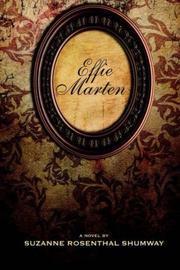 A young woman fights for her sanity in Victorian England.

When Shumway’s debut historical novel opens in the spring of 1837, little Euphemia “Effie” Marten’s life is idyllic: She’s the daughter of Henry Marten of Marten House, the squire of Chilton Foliat, whose manor house and estate grounds form a beautiful backdrop to games Effie plays with her adored older brother, George. But their happiness shatters seven years later when a drunken George, after three unsuccessful terms at Oxford (and driven to despair by his enormous debts), drowns himself in the River Cherwell. His suicide not only brings pain and grief on his stunned family, but also brings George’s outstanding debts to the Marten estate. When Mr. Marten sells her horse to help pay George’s debts, Effie’s grief leads her to behave oddly. She sneaks out of the house dressed as a boy, is quickly discovered, announces her intention to travel to Oxford alone to pay her respects at her brother’s grave, and, when forbidden to do so by her father, throws things and bites her father’s hand. Her father promptly consigns her to the care of the family doctor and sends her to Warrinder House, a lunatic asylum in Lyme Regis (although she later scoffs at the term: “Asylum?” she says. “Warrinder House was neither more nor less than a gaol for wayward females—a dumping ground”). There, she encounters a somewhat predictable string of brutalities that convinces her to escape with a friend and work to expose the shady practices of Warrinder House. The novel’s period details are refreshingly well-researched (Jane Austen fans will find their beloved Lyme Regis faithfully drawn), and the state of Victorian mental health practices is harrowingly portrayed. Effie’s own shift into bizarre behavior seems a bit arbitrary (it comes as a surprise when we’re flatly told, early on, that she’s “slightly unbalanced”), but readers will end up rooting for her.

A richly imagined look at the high price one pre-modern woman pays for her independence.