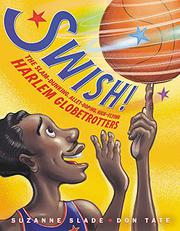 A lively look at the history of the Harlem Globetrotters.

Five serious African American basketball players with no opportunity to play in the top teams due to the racism of the 1920s took their basketball skills on the road, calling themselves the Harlem Globe Trotters (they became the Globetrotters sometime in the ’30s). White America had a hard time coping with the Trotters’ beating their teams—until the Trotters changed the way they played. They turned their games into theatrics, emphasizing slapstick and hilarity while at the same time honing their skills till “they played the most breathtaking, groundbreaking ball the country had ever seen.” In 1948, Globetrotters finally got an opportunity to challenge the Minnesota Lakers, the best team in the Whites-only NBA. The Globetrotters’ win caused the entire NBA to reconsider their recruitment policy. Slade has done careful, thorough research, easily engaging young readers as they learn about the Globetrotters’ groundbreaking history. Veteran illustrator Tate creates constant movement, visually underscoring the title with dynamic (sometimes impossible) perspectives and basketballs caught in stop-motion fashion as they fly across the court. Robust backmatter bolsters the account, including a detailed timeline that’s thoughtfully printed on the inside pages of the endpapers so that pasted-down jacket flaps will not obscure any of it.

From beginning to end, fans will feel connected to the dynamic style of the Globetrotters and how they influenced American history.