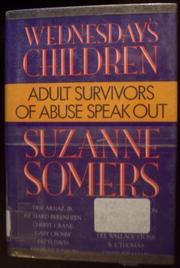 Adult Survivors of Abuse Speak Out

Somers continues the campaign against child abuse that she began with her forceful autobiography, Keeping Secrets (1987). Here, the popular comedienne-with-a-cause has persuaded 22 fellow victims to donate ``qualifications'' about their abuse- experience; of the 22, most are celebrities (``I believe...Americans feel more comfortable addressing personal problems of their own once celebrities they admire go public,'' argues Somers—who's bestowed her own high-profile name on the Palm Springs-based Suzanne Somers Institute, for families victimized by addiction). Somers divides the contributions according to type of abuse: ``emotional'' (Angie Dickinson, Cindy Williams, Patti Davis, et al.); ``physical'' (Randy Shilts, Gary Crosby, et al.); ``sexual'' (B.J. Thomas, Traci Lords, et al.). Much of this material shocks (``from the time I was ten years old until I was thirteen I was sexually abused by my mother's third husband, Lex Barker,'' writes Cheryl Crane. ``After the first assault, Lex said to me, `You know what happens to little girls who tell? They get sent away to juvenile hall and never see their parents again' ''). Some of it intrigues as character-study (Traci Lords links her teenage career as a porn star to an alcoholic dad; Richard Berendzen, the American Univ. president canned for making indecent phone calls, links those calls to his having been sexually abused by a woman at age 11). And nearly all of it proves affecting, as these men and women explain their growth from mea culpa to J'accuse and, finally, into personal responsibility. A curious but irresistible mix of soulful sincerity and glitter-sleaze that could sell through the roof.