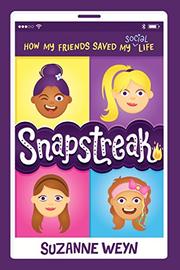 How My Friends Saved My (social) Life

A local TV station announces a contest for the longest Snapstreak between two students from different schools. The reward is a concert by the popular boy band Boys Being Dudes. Black eighth-grader Vee, who will soon be moving to a new school, courageously asks Gwynneth, its white queen bee, to be her partner in the contest. Vee and Gwynneth are leading the competition when Vee sustains a concussion playing lacrosse and must give up screen time. Vee’s best friends, Megan, a white girl, and Lulu, a Latina, take over her cellphone for her—and things go awry quickly. The frothy story is told from multiple points of view, each girl’s voice flagged with distinctive borders. Unfortunately, all four voices sound similar. The integration of this ubiquitous app into the story mimics real life, with all the distractions and attractions in the world of young teens, and the inaccurate assumptions the girls form via Snapchat make for a strong message. Even though Snapchat legally requires users to be 13, this book for preteens assumes familiarity with its conventions. Luckily, emoji-speak and acronyms are kept to a minimum. The content may already be dated, as the ephemeral Snapchat “story” function has overtaken “chatting.”

For reluctant readers not drawn to genre fiction, this story may speak to them for a little while.