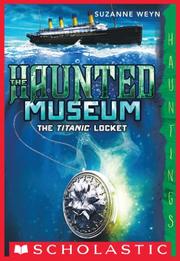 From the Haunted Museum series, volume 1

Spectral voyagers practically outnumber the living ones on a re-enactment of the Titanic’s cruise in this ghost-happy series opener.

A visit to a creepy museum just before boarding a replica of the famous liner leaves sisters Samantha and Jessica saddled with a locket salvaged from the original ship that keeps coming back despite their increasingly frantic efforts to get rid of it. Worse yet, they begin to notice sudden chills, scratching and whimpering sounds in the walls and a weirdly mutable number on their cabin door. Frequent encounters with supernatural figures (some historical, such as John Jacob Astor’s dog, Kitty) escalate until Jessica is nearly drowned in the bath by a poltergeist, Samantha is trapped in the elegant ballroom with dancers who rot before her eyes, and both sisters are forcibly possessed by the spirits of former passengers with personal scores to settle. Weyn ratchets up the eeriness by pairing off several of her living characters with strangely similar dead ones and quickly builds to a stormy climax that the sisters narrowly survive thanks to timely intervention by a powerful medium. After that, it’s smooth sailing—at least until the next episode.

Mild goose bumps for readers who prefer their ectoplasm served up in buckets.