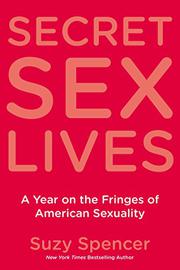 A Year on the Fringes of American Sexuality

Investigative journalist Spencer expands her own sexual boundaries through the exploration of others’.

“Worn out from all the tragedy” of a decade penning true crime books, Spencer (Wages of Sin, 2010) engagingly steers readers through the wonderful world of contemporary sexuality. The pensive, unmarried Texan considers herself sexually ignorant, doesn’t particularly like to be touched (never has), and comes from a religious family who shunned the idea of crafting a memoir exploring the sex lives of random Americans. Surprisingly, the project transformed her from lonely, sexually timid 50-something into a woman budding with intimate possibilities. Posting a succession of inquisitive online personal ads probing responders’ bedroom activities, Spencer unleashes a battalion of sexed-up soldiers eager to interact and share prurient and often tabooed sex-drenched adventures. Among her profiles are a few hypersexual females, a flirtatious adulterer half her age, horny swingers looking for “more on the side,” a parade of randy bisexuals, phone-sex enthusiasts and a cross-dressing father of two. As Spencer exposes the flesh behind the fantasy, she incrementally reveals aspects of her own personal life, which frequently saves the text from dissolving into a blur of America’s hot and bothered. Eventually, the book becomes a psychological science project, as the author experimented, challenged her beliefs, and arrived at epiphanies far different from her opening declaration that “it’s a lot safer to laugh about sex than have sex.” Both a celebration of sexuality and, for the author, an embracive awakening to it.