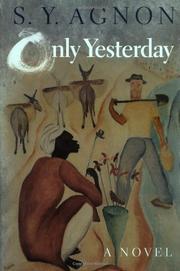 Never before available in English, a masterpiece of the picaresque by the Nobel laureate who is arguably the greatest novelist in modern Hebrew.

Fifty-five years after this epic tale’s initial publication, Harshav provides an eloquent translation, successfully capturing Agnon’s carefully nuanced and bitter humor. A nonentity, a schlemiel named Isaac Kumer, arrives in Palestine as one of the dreamy-eyed pioneers of the Second Aliyah, the wave of Jewish immigrants who, impelled by Zionist rhetoric, came to the barren precincts of the Holy Land late in the first decade of the 20th century. Isaac, like his fellows, wants to work the land, to walk behind a plow making a desert blossom, but the hapless, feckless young Galician ends up as an itinerant sign painter instead. Over the course of the novel he drifts between women, ideologies, and influences, a sort of filial figure "adopted'' by an entire range of Zionists, would-be socialists, and rabbis Orthodox and un-, not to mention the extraordinary Sonya, who introduces him to love and loss. Then Kumer, a holy fool of sorts, engages in a single act of childish horseplay, painting the words crazy dog on the side of a mongrel stray, that sets in motion the forces of his own destruction and simultaneously gives the work a daring, unpredictable second narrative focus. Agnon tells the story in a wildly shifting kaleidoscope of plotlines, syntaxes, tenses, and voices, with scathing satirical barbs that spare almost no one, including the author himself, leaping from third person to first-person plural to include his entire generation in Isaac's failings and foibles. Harshav's special achievement: she conveys brilliantly all of Agnon's impetuous leaps, poetic digressions, and wry satire (an achievement all the more admirable because she matches it in her translation of Amos Oz's essays on Agnon, p. 362).

One of the finest novels of this century.