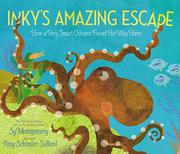 How a Very Smart Octopus Found His Way Home

The author of The Soul of an Octopus (2015, for adults) provides a picture-book example of octopus intelligence in this latest account of the escape of an octopus named Inky from the New Zealand National Aquarium. Her well-paced narrative begins with his hatching in the wild, from an egg “the size of a grain of rice.” The writer weaves in plenty of informational details about octopuses’ physical characteristics and habits while she spins the likely story of his injury (two tentacles partially bitten off by a moray eel), accidental capture, and subsequent life in a public aquarium. The smooth prose invites children’s appreciation for this remarkable species, which even enjoy playing with familiar toys. A reassuring endnote explains that the octopus was “probably very happy in his tank at the aquarium.” But, like readers and listeners, he was curious, “eager to discover what else is out there.” Colorful, digitally finished illustrations created using various paints, oil pastel, and collage give a reasonable impression of the octopus’s world, but Inky’s popping eyes lack the characteristic, usually rectangular slit, and he’s shown as female. A New Zealand street scene has cars driving on the wrong side of the road.

Montgomery’s imagined story is informed by her extensive knowledge and rings true; sadly, the illustrations are less convincing. Still, this is the most plausible of many recent iterations of this great escape.