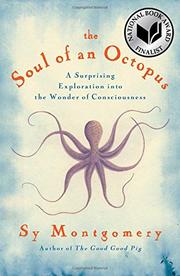 THE SOUL OF AN OCTOPUS

A Surprising Exploration Into the Wonder of Consciousness

Naturalist Montgomery (Birdology, 2010, etc.) chronicles her extraordinary experience bonding with three octopuses housed in the New England Aquarium and the small group of people who became devoted to them.

As a casual visitor to the aquarium, she had been intrigued by the sense that the octopuses, invertebrates separated from us by millions of years on the tree of life, she watched were also watching her. “Was it possible,” she writes, “to reach another mind on the other side of the divide?” Their appendages are covered with “dexterous, grasping suckers” that propel food into mouths located in their armpits, and they savor the taste of food as it travels along their skin. This ability is one of the ways in which they perceive their environment. On her first behind-the-scenes visit to the aquarium, Montgomery was given the opportunity to directly interact with Athena, a 2 1/2-year-old, 40-pound octopus housed in a 560-gallon tank. Hosted by the aquarium's director of public relations, with other personnel on standby to ensure her safety, the author was encouraged to place her hand in the tank. Though Athena possessed the strength to pull Montgomery into the tank, she was gentle and even playful. The author describes the thrill of this and subsequent encounters with Athena and two other octopuses housed at the aquarium. They recognized and openly welcomed her visits, soliciting petting and stroking as might a house pet in similar circumstances. Octopuses seemingly relate easily to humans, quickly learning to pick up cues from their keepers, who make a game of hiding food, and in turn play tricks on them. Yet in the wild, they are generally solitary and may attack and eat others of their species if placed in the same tank. With apparent delight, Montgomery puts readers inside the world of these amazing creatures.

A fascinating glimpse into an alien consciousness.