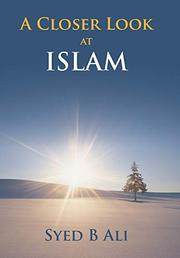 A CLOSER LOOK AT ISLAM

by Syed B. Ali

A sober defense of a theologically moderate form of Islam.

Some critics see Islam—and, by extension, the whole of the Quran—as a symbol of unrepentant extremism and atavistic contempt for modernity. But Ali, in this debut, highlights how such interpretations are based on ignorance, political appropriation, and willful distortion. He says that his book’s “sole purpose” is “refuting false charges against Islam,” and he begins by taking on criticisms that former Muslims–turned-apostates have leveled in well-known publications. Against their charges, Ali contends that Islam is essentially a religion of peace and that the Quran commands its disciples to treat non-Muslims respectfully; he also impugns both the motives and the moral credibility of Islam’s detractors. The author presents a much more moderate and diverse understanding of Sharia, which is neither univocal—each school adheres to its own version—nor brutal, if properly based upon the Quran’s teachings. He also counters specific criticisms directed at the Prophet Muhammad and discusses the challenges of formulating a consensus on a religion that’s so ideologically splintered into warring camps. Ali devotes two chapters to articulating a sound exegesis of the Quran—one that fully considers the cultural and scriptural context of every sentence. The study culminates in biographical accounts of three imams who he says lived stellar lives that were faithful to Islamic teachings. The author is typically rigorous and scrupulously debunks a catalog of common misconceptions. For example, he provides compelling evidence that denigration of women, which some critics flippantly associate with Islam, is a cultural failing that isn’t encouraged by Muslim doctrine. Sometimes the author indulges in hyperbolic caricature himself; for example, he broadly accuses atheist thought of having “a complete lack of sensitivity and empathy.” However, more often than not, his scholarship is meticulous, and he ably defends Islamic theology. Overall, this is a timely book that’s both edifying and refreshingly temperate.

A brief but thorough consideration of Muslim devotion.