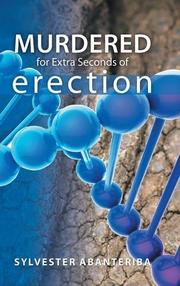 Murdered for Extra Seconds of Erection

In this dystopian novel, scientists struggle to find the source of a worldwide virus causing sexually stimulated men to assault women.

Women aboard the luxury cruise ship Luxus Maximus find themselves the targets of an unlikely threat—the male passengers. The men, with conspicuously engorged members, accost the ladies in an apparent trance. The women duck out in a suite and get help from the Australian Federal Police, boarding via helicopter. Doctors, however, can find nothing wrong with the affected men, who later express no interest in females, sexual or otherwise. A quarantine to subvert a potential outbreak is evidently ineffective: men are soon trying to force themselves onto women on a global scale. Scientists, including geneticist Dr. Roger Klein, can’t immediately pinpoint the cause but determine that the mere sight of the opposite sex triggers the men’s response. Agencies, meanwhile, opt for temporary solutions. Separating the genders, for one, fails when armed male soldiers, intended to keep men away from safe zones, cross into the women’s areas and attack. Burqas quiet things down, but Christians suggesting that a cross be emblazoned on the Islamic garment ignites heated religious debates and eventual terrorist strikes. Klein discovers a mutating virus and a message—converted to audio and visual components—in genetic material. If the message can be translated, scientists may uncover the virus’s origin and possibly a cure. Despite a seemingly playful title, the novel takes itself seriously, more in tune with dark satire. There’s copious fallout from the virus, for example, like the chance of economic crisis because women primarily staying inside diminishes the workforce. Abanteriba (Poetic Retribution from Mars, 2006) provides back stories for notable characters such as Klein and Dr. Harald Brand, director-general of the World Health Organization. Regardless, a focus on the plot doesn’t afford them much personality. The latter half slows down considerably, with Klein and company searching for someone to translate the message. This portion is too long and tedious, repeatedly stressing that the world is on the “precipice” of or “teetering” on disaster (or doom, etc.). But the moral remains loud and clear, leading to a clever reexamination of the title and the imposing final thought.

Often more a metaphorical than tangible story, but unquestionably a literary journey worth taking.